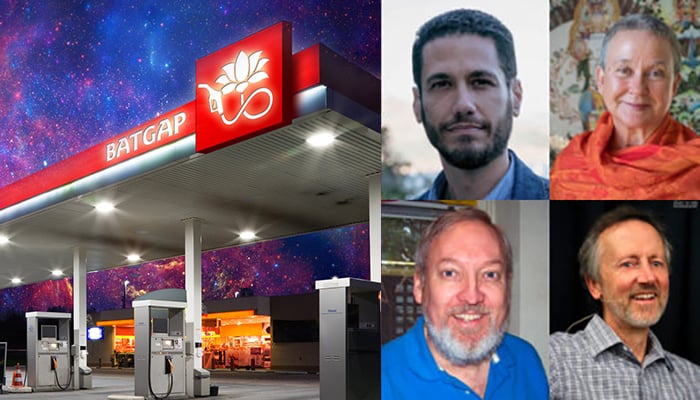 On The Air: Buddha at the Gas Pump Episode #427: Sudden or Gradual: Two Paths to Realization?

Rick Archer created Buddha at the Gas Pump in the Fall of 2009 and has since interviewed countless spiritually awakening people, from the well-known to the unknown, and from a variety of backgrounds and traditions. He conducts a new interview each week in hopes to help ordinary people share their experience of awakening.
In this episode, Archer leads a panel alongside previous BATGAP guests Isa Gucciardi, David F. Buckland, and Michael Rodriguez to address a perennial debate in spiritual traditions: whether realization is direct (sudden) or progressive (gradual). This talk was recorded October 22, 2017 at the Science and Nonduality Conference.
About Isa Gucciardi:
Isa Gucciardi, Ph.D. is the Founding Director of the Foundation of the Sacred Stream, a school for consciousness studies in Berkeley, CA. Isa is also the creator of the spiritual counseling model, Depth Hypnosis, and author of two books, Coming to Peace and Return to the Great Mother. In addition to her teaching schedule that includes teaching classes in Applied Buddhist Psychology, Applied Shamanism, Integrated Energy Medicine and Depth Hypnosis, she has active practices in Depth Hypnosis and Applied Shamanic Counseling in San Francisco, CA.
About David F. Buckland:
David F. Buckland has a graduate degree in Vedic Science and researches and writes on subjects related to the approach, shift, integration, and embodiment of the stages of enlightenment. This reflects a 40 year unfolding that has been prominent for much of his life. But with a more recent series of profound shifts, the exploration became the life itself. Under the pen name Davidya, he brings ancient teachings into modern life. After many years of research, he published the book, Our Natural Potential: Beyond Personal Development, The Stages of Enlightenment, in 2017.
About Michael Rodriguez:
Michael’s spiritual path began 23 years ago with Zen and subsequently included a master’s degree in theology from Harvard, a two-year stay at a monastery, and deep engagements with Vedanta, Tibetan Buddhism, Kashmir Shaivism, and Christian mysticism. Based especially on his exposure to Nisargadatta, Mooji, and Rupert Spira, his spiritual path culminated with an Awakening to True Nature during a five-year period of purification and alchemical transmutation where his insight into non-dual Awareness became embodied and grounded.
Discuss this episode in the Batgap Community Facebook Group. Watch the video below, and subscribe to BATGAP’s YouTube channel for future episodes. Audio available on iTunes.