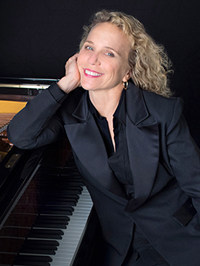 Barbara Higbie is a Grammy-nominated, Bammy award winning pianist, composer, violinist, singer-songwriter, and multi-instrumentalist. She is a folk, jazz, pop, and fusion singer-songwriter, noted for her highly melodic, jazz/folk piano performances. Barbara has toured nationally and internationally since the early 1980s. An early recording artist on the Windham Hill record label, she formed and played with the group Montreux along with Darol Anger, Mike Marshall, Todd Phillips, and Michael Manring. She recorded a critically acclaimed album with singer Teresa Trull in 1983 and again in 1998. Since 1990, Barbara Higbie has released a number of solo albums on the Windham Hill and Slowbaby labels. She resides in the San Francisco Bay Area with her family.