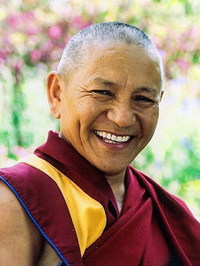 Geshe Pema Dorjee was born in Tibet and escaped with his family in 1959 at the age of five years old. He attended the Institute of Buddhist Dialectics in Dharamsala, India where he earned degrees in both Prajnaparamitra and Madhyamika. He became a teacher, and eventually the Director of the Tibetan Children’s Village School in Dharamsala, where he served for over twenty years, helping to recreate and preserve the Tibetan culture and education system for Tibetan children in exile. In 1995 he was awarded the Geshe degree from the Drepung Loseling monastery in South India and became the first Principal of the College for Higher Tibetan Studies. In 2001, His Holiness the Dalai Lama asked Geshe la to revive and promote the Bodong tradition, and with aid from His Holiness, became the founder and Director of the Bodong Research and Publication Center. The Tibetan government in exile appointed him to the Higher Level Textbook Review Committee as well as spiritual counselor to former political prisoners who had been tortured. In addition to his many charitable projects, Geshe Pema Dorjee has taught and lectured about Tibetan Buddhism around the world and speaks English fluently.