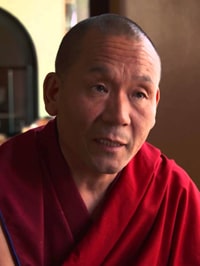 Geshe Thupten is the eldest of two sons and became a monk at the age of eight at his local monastery, Dhankar. At the age of seventeen, he moved to the Gaden Shartse Dokhang monastery in order to advance in his studies. He has received teachings and empowerments from many high lamas of the Gelugpa tradition and has received the highest degree, Geshe Lharampa. Geshe Thupten has taught Buddhist Philosophy at Gaden Shartse Monastery and has taught Dharma in Europe and the U.S. for many years. Geshela is currently serving as the assistant Abbott of Gyuto Tantric Monastic University in Dharmsala. He will be enthroned as the Abbott of Gyuto Tantric Monastic University by His Holiness the 14th Dalai Lama in March 2017.