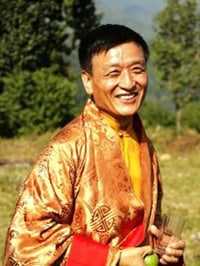 Tenzin Wangyal Rinpoche is a teacher of the Bon Tibetan religious tradition. He is founder and director of the Ligmincha Institute and several centers named Chamma Ling, organizations dedicated to the study and practice of the teachings of the Bon tradition. He is recognized as the reincarnation of the famous master Khung Tul Rinpoche, a great meditator and scholar. At the age of thirteen, he began dzogchen training from both Buddhist and Bon teachers. He began an eleven-year traditional course of instruction at Bonpo Monastic Center and in 1986 attained the degree of Geshe. He has worked at the Library of Tibetan Works and Archives in Dharamsala, India. He is a two-time recipient of the Rockefeller Fellowship at Rice University in Houston, Texas.

The Tibetan Yogas of Dream and Sleep
Wonders of the Natural Mind
Healing with Form, Energy, and Light
Unbounded Wholeness, Dzogchen, Bon and the Logic of the Nonconceptual
Tibetan Sound Healing
Awakening the Sacred Body