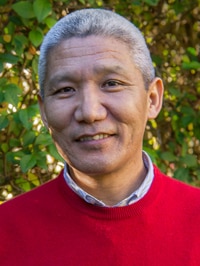 Thupten Jinpa has been the principal English translator to the Dalai Lama since 1985. He has translated and edited more than ten books by the Dalai Lama and written several of his own, including the popular, A Fearless Heart: How the Courage to be Compassionate Can Transform Our Lives. He received his early education and training as a monk at Zongkar Chöde Monastery in South India and later joined the Shartse College of Ganden monastic university, South India, where he received the Geshe Lharam degree. Jinpa also holds a B.A. Honors degree in Western Philosophy and a Ph.D. degree in Religious Studies, both from Cambridge University, UK. He established the Institute of Tibetan Classics where he is both president and editor-in-chief of the Institute’s translation series Classics in Tibet. Jinpa is also Chairman of the Mind and Life Institute, creator of the Compassion Protocol and a visiting scholar at the Stanford Institute for Neuro-Innovation and Translational Neurosciences at Stanford University.

Praise for the Sacred Stream:

“I have known Dr. Isa Gucciardi and her work for a long time, especially her Depth Hypnosis and applied Buddhist psychology work. I see Isa’s Depth Hypnosis as a creative and powerful approach that brings the best of Buddhist psychological insights into a practical application relevant to someone living in today’s highly complex and stressed society. One of the things I have discovered from my own work on compassion cultivation is that, in the West, many people face tremendous challenge when it comes to self-compassion and genuine self-acceptance. Often, in the West, we are our harshest critic – we beat ourselves up, do not give ourselves any slack, and live a life where we put ourselves under the constant watch of this inner self-critic. A large part of that problem, I believe, comes from our felt need to control ourselves all the time and our inability to let go. In Depth Hypnosis, because of the creative use of an altered state, there is the beautiful opportunity for us to be able to let go of ourselves and experience that sense of freedom and spaciousness, within which we can then begin to reconnect parts of ourselves that are somehow misaligned. So I see Depth Hypnosis as a creative approach that could really help many people with their deeply rooted challenges of self-harshness and lack of adequate self-kindness.”

Tibetan Songs of Spiritual Experience
Self, Reality and Reason in Tibetan Thought: Tsongkhapa’s Quest for the Middle View
The World of Tibetan Buddhism: An Overview of Its Philosophy and Practice
The Middle Way: Faith Grounded in Reason
Ornament of Stainless Light: An Exposition of the Kalachakra Tantra
Practicing Wisdom
Transforming the Mind: Teachings on Generating Compassion
The Art of Living: A Guide to Contentment, Joy and Fulfillment
The Tibetan Way of Life, Death & Rebirth: The Illustrated Guide to Tibetan Wisdom
The Power of Compassion
Essence of the Heart Sutra: The Dalai Lama’s Heart of Wisdom Teachings

Mind Training: The Great Collection
The World of Tibetan Buddhism
A Good Heart: A Buddhist Perspective on the Teachings of Jesus
Ethics for the New Millennium
Sixty Stanzas of Reasoning
Three Principal Aspects of the Path
In Praise of Dependent Origination
Wisdom of the Kadam Masters
Hymn to the Buddha, the World Transcendent
Commentary on the Awakening Mind
A Garland of Views Attributed to Padmasambhava
Songs of Experience on the Stages of the Path
Root Lines on Classical Indian Philosophies
A Song on the View Openning the Eyes to Suchness
Prayer for the Long Life of His Holiness the Dalai Lama