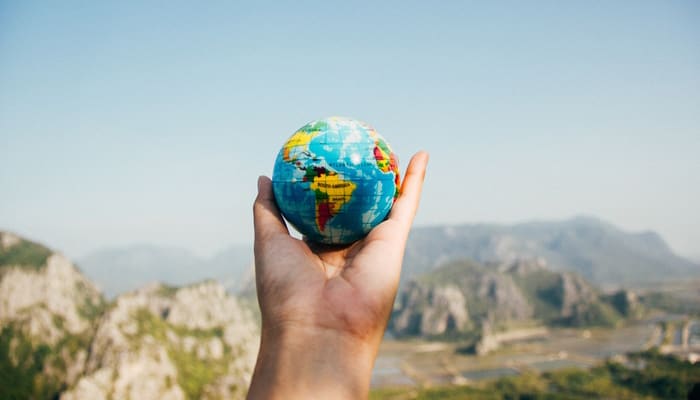 Article: Circles for the Earth: Restoring the Health of the Planet

Fires in California, chemical and oil spills, deadly heatwaves in India, floods in Japan, the extinction of species after species…

People are often uncertain of how they can protect the wellbeing of the planet in these calamitous times. While it can be overwhelming, it’s important to realize we can create change by engaging in social activism, and by individually and collectively aligning ourselves with the forces of nature, just as shamans have done since time immemorial. With the Circles for the Earth, shamanic practitioners gather to create positive change by focusing on a common intention.

The techniques used in the Circles for the Earth have roots in weather shamanism, which has been practiced around the world in different shamanic traditions for millennia. Weather shamans might work directly with the elements and spirits of nature to bring rain during times of drought.

When I was a child, I lived for a time on a ranch in the Sierra Madre mountains of northern Mexico, where drought was common. The ranch hands were members of a Huichol community and had strong shamanic roots. After a particularly long dry spell, they went to fetch one of the elders from their village. The village was some distance away, and they brought him a horse so he could travel to the ranch and say prayers for the land.

The man took up residence in one of the old adobe buildings at the edge of the mesa. He spent several days alone in ceremony saying prayers, tending a fire, and singing. He was communing with the elements of nature to bring balance to the land, the way people around the world often contact unseen powers that, in shamanic practice, are understood to exist all around us. He was aligning himself and his prayer for rain with the earth, the elements and his “helping spirits” or “inner guides.”

After a few days of ceremony, the weather began to shift. The dry, cloudless skies gave way to a softer wind. Finally, the old man could rest. After he spent time with the people from his village who lived on the ranch, he got back on his horse and left. Soon after, rain clouds appeared.

In the west, our education system is centered around understanding the material world and how it functions. While this is important, there are areas of study even within science that focus on examining how unseen forces affect material processes. For example, chemistry, biochemistry, physics, and quantum physics investigate the subtle forces that surround us and their effect on physical experience.

Shamans are doing their own investigations as they engage with the natural world. Because of the split between science and spirit in the west, any scientific exploration of spirit has atrophied. However, there are spiritual traditions where this split has not impacted the study of subtle experience. These include certain shamanic traditions, Vedic science, yoga– particularly pranayoga– and all Buddhist traditions.

Advanced shamanic practice requires a deep knowledge of the way energy– in the forms of light, elements and sound– influences the material world. This knowledge can be attained through shamanic education with skilled teachers who work simultaneously on the inner planes and in the physical world. The Healing for the Earth class at the Sacred Stream is one place where this education can be found. Everyone can learn how intention affects outcome and how to correct intention when it’s not producing desired outcomes.

In the 1800s, Native Hawaiians watching missionaries pray called them “Haole,” or “those without breath.” They understood they were trying to contact spirit, but from the Hawaiians’ point of view, the missionaries did not fully comprehend how phenomena move on a spirit level. Without breath, the carrier of light and sound that many eastern traditions such as yoga cultivate and study, they believed the prayers were bound to produce mixed results.

The Earth is currently in crisis, and The Circles for the Earth give people an opportunity to offer their assistance. The circles provide a forum to help balance the land itself, offering healing to the animals and plants whose lives are impacted. People can also participate in circles when they are not physically present. This is called working “non-locally.” Often, members of the Circles for the Earth are far removed from the land they seek to balance.

Over the past year, the Sacred Stream has held circles to restore balance to Northern California in the aftermath of the fires. In these circles, after we do shamanic journeys, ceremonies or offer positive intention through prayer or meditation, we share our experience. Members of the circles shared the following reports from the journey work they did with their shamanic guides:

“Gaia, the spirit of the Earth, brought rain and started pouring it, with clear light, onto the cracked ground. She touched the Earth with her hand to start the process of healing.”

“A rainbow net was cast in each of the four directions to allow beings and the land to heal while the elements brought their messages. Earth absorbed the light, and water broke up the blocked energy of those beings impacted by the fire. Water also brought a cooling and a deepening of stability again. This grounded all beings more deeply with Mother Earth. Water swirled and soothed what it touched, bringing healing sounds and clarity of vision of how beings can be healed.”

“We blew away the debris so carefully, so the seeds may call back the Light. We went to the River and breathed the gentle breath of life back into the fish who were struggling. We helped them filter the toxins out. The Ancestors were there. They told us the stories of drought and fires long ago and far away, and gifted us the songs of calling back the rains. We told the stories in many realms and realities so all the beings could hear them. We sang the rains back down to their clearing homes. We held so much beautiful light all around and our hearts spoke to their hearts, saying, ‘We remember. We remember.’”

“My guides took me into the Heart of the Fire– into the calm center of the raging inferno. The Fire Spirit told me that Fire must manifest in great power and fury at times. This is its nature. Here is its message: ‘Due to misguided fire suppression policies, the fury expands with pent-up energy. Also, the human species has encroached into the forest and open lands in unwise ways, thus increasing the imbalance. Therefore, my natural need to express and transform and cleanse is twisted into a more destructive expression. Continue your rituals to assist in the balancing of my energy; continue with prayers and rituals that can help the human community learn to live in harmony with the Earth, Air, Fire, and Water Spirits.’”

The mission of the Circles for the Earth is to restore balance to the natural world which has been thrown out of equilibrium due to climate change and the activities of humans. The following clearing was held to bring balance to the lands and animals of the Arctic that were affected by the annual government-sponsored slaughter of whales in Denmark, baby fur seals in Canada and dolphins in Japan. These are animals that spend time near the Arctic Circle, and the intention of this circle was to help restore the Arctic and mitigate the negative impact of these government policies on animals and their homes.

“My guides helped focus power into the collective power loss due to the disruption in the harmonious interconnectedness of everything. They indicated that these activities are a wound for the ocean as much as for the beings.”

“The dolphins and my bird guides flew in a spiral. My sea guides swam in a spiral to create a vortex and help with the transition of the spirits of the dolphins. The vortex became self-sustaining. I heard the song of the whales. The energy of the song was to soften the hearts of humans and to connect all human hearts back to source.”

“I went to the Arctic with my guides and felt the grief and loss of the Earth. The guides helped to release those feelings and bring in compassionate, healing energy. I felt the presence of many other healers there, all of us were working together. “

“My blue whale guide took me to the Arctic circle, singing a powerful whale song that passed from whale to whale, forming a grid across the earth. The whales lifted consciousness from the bottom of the ocean to help bring balance.”

These reports reflect the many ways shamanic practice can catalyze healing and restoration, and they show that everyone has a unique way of working with their guides, their intention, and the spirits of nature. In the future, we hope to expand our Circles for the Earth to support individuals and communities who are working in their own way to restore the health of the planet.