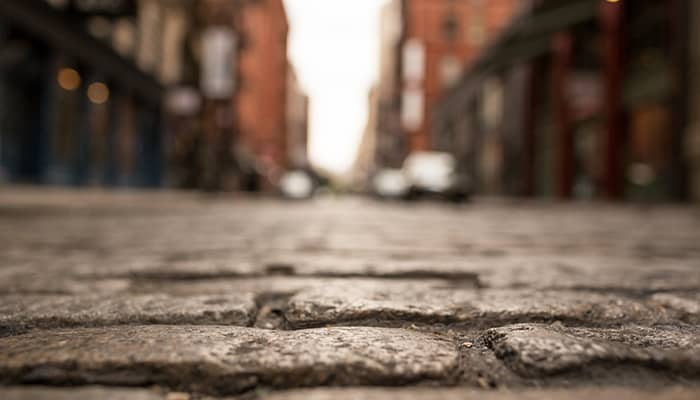 You may have read my article, “Driving with Bob,” which talks about the existential fun that is a feature of driving around with Robert Thurman. We have had many adventures behind the wheel, as I often volunteer to take him up and down the California coast to his various commitments when he is out West. It is always a pleasure for me to be able support him in this way, and, as I point out in the article, there is seldom a dull moment with Bob around. We did have a moment driving in traffic on the San Francisco–Oakland Bay Bridge the last time he was in town that could have been a bit duller to my way of thinking.

A man in a huge Toyota SUV decided that I had cut him off unfairly as he merged into my lane without signaling in any way. He began honking and flashing his lights at us. Then he pulled up beside us and started screaming. I had already gone into no-reaction mode when Bob said, “Don’t react. Just drive.” We both held steady and calm as he continued to berate us. Then he pulled in front of us and slammed on his brakes. I was able to stop, but the car in the next lane had been getting ready to come into our lane and barely missed him.

So he started honking and screaming at the other driver – who reacted in-kind – and pretty soon the two of them were in a full-on war as we crossed the bridge. I was trying to channel in some light to help the situation when I realized that Bob was saying mantras. We continued in our efforts to calm the situation in this way as the war skirted around us, behind us and actually, all around us. Given the intensity of the negativity the two drivers were throwing around, I was surprised there was not an accident.

I had the distinct impression of a much larger sphere of experience where a force for peace was at work in the wider world—not just in the fog of the Bay Bridge. It actually turned out to be a deepening moment for both of us. I understood what it was to be able to react in a peaceful way in tandem with another in the face of raw aggression. I felt the support not only of my own practice, but also from Bob in stabilizing the situation. It was a reminder to me of all those who are working for peace in the face of all the war mongering around us, and that we can unite and feel the support of our efforts toward peace even when the situation becomes dangerous and seemingly out of control.

When I got home, I checked the local news by searching “road rage, Bay Bridge” and the date to see if they had actually come to blows after we got off at our exit. This search brought up dmv.org, a website that says it is designed to make understanding the Department of Motor Vehicles easier to navigate. As I had landed on the road rage page, I looked around. It had some surprisingly Buddhist counsel for dealing with troublesome motorists:

When another upsets you, don’t make the situation more difficult than it has to be. Before taking matters into your own hands, you should:
• Pull over to a safe location, out of the way of traffic.
• Take deep breaths—maybe even count backwards.
• Remember you have full control over your own actions and thoughts.
• Think about the consequences of your actions, should you contemplate exacting revenge on the other driver.

Meditation, mindfulness, and maintaining awareness of the activity of karma – all in four simple bullet points! Beyond the fact that it is wonderful that Buddhist principles are being offered as a solution to one of the most common forms of violence we experience in our daily lives, this memo reminds us that we have the opportunity to practice tolerance, patience, and diligence in every moment. And we can remember, even when we are driving alone, that there are others who are also trying to remember this wise counsel. This knowledge can help strengthen our resolve to work toward peace in even the midst of any challenge—large or small.