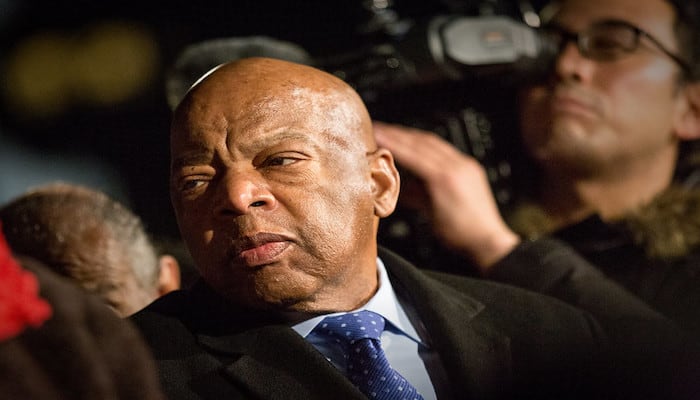 Blog: John Lewis and the Good Trouble Path of Peace

In a commencement speech he gave at Emory University, the late civil rights leader and Congressman from the 5th District of Georgia, John Lewis said, “You must find a way to get in trouble, good trouble, necessary trouble.” For decades, getting into good trouble has been the creed of Lewis, described as the “Conscience of Congress” by House Speaker Nancy Pelosi. His death on July 17, 2020 comes at a time of great social unrest in this country, yet his legacy offers us an example of how to proceed in these times and, even more importantly, it offers us hope.

Lewis was the last living member of the Big Six leaders who organized the 1963 March on Washington, and he led the historic first march across the Edmund Pettus Bridge, which became known as Bloody Sunday. His actions and work with the civil rights movement contributed to ending legal segregation in the United States and he continued his work and lifelong commitment to social justice and the causes of democracy, serving 17 terms in the US House of Representatives.

John Lewis’ life was one of activism informed by his faith. He was dedicated to nonviolence and learned the concepts of nonviolent protest through his study of Christian texts, trainings with the Nashville Christian Leadership Conference, and the example set by Mahatma Gandhi. Like Gandhi, Lewis and the participants in the early civil rights movement understood the power of nonviolent action and stood bravely in the face of oppressive hostility. Lewis endured physical beatings and was arrested over 40 times without succumbing to violence himself, and he held to this principle of nonviolence his entire life.

Men and women of faith dedicated to nonviolent resistance shaped the early civil rights movement. It was inclusive in that people of all faiths, races, sexual orientations, and genders participated. One of the early leaders along with Lewis was Bayard Rustin, a gay man and leading strategist of the civil rights movement from 1955 to 1968. He helped organize the Southern Christian Leadership Conference (SCLC) and promoted the philosophy of nonviolence and the practices of nonviolent resistance, which he experienced first-hand while working with Gandhi’s movement in India.

Lewis remained true to his roots of inclusiveness and fought for equality for everyone throughout his tenure in congress. At a 2014 Human Rights Campaign event, Lewis addressed the question of why he fought for gay rights and marriage equality. He said, “My simple answer is I fought too hard and too long against discrimination based on race and color not to stand up for discrimination today based on sexual orientation.”

Similarly, his commitment to nonviolence was steadfast throughout his life. As the civil rights movement gained momentum, some in the movement questioned the wisdom of nonviolence and there was a split that eventually grew in the movement between those committed to nonviolent resistance and those that believed change would not come without using violence as a response.

Lewis captures this split in an excerpt from his book, Walking with the Wind. He describes a particularly tense moment when a member of the Student Nonviolent Coordinating Committee, Jim Forman, addressed a group of ministers, among them Martin Luther King, and said: “If we can’t sit at the table of democracy we will tear the F-ing legs off of it.” Lewis writes, “[People] were shocked. I was not. I’d heard Forman use that kind of language many times at Student Nonviolent Coordinating Committee (SNCC) meetings. But I was dismayed. That was not the language of the nonviolence movement. That was not the message of the movement, at least not of the movement I was part of. And that was what was most significant to me about the speech, not the fact that Forman’s words were so bold and profane, but the fact that they pointed the way down a road SNCC was headed that I knew I would not be able to travel.”

Many people today invoke John Lewis’ name and quote his “get into good trouble” creed when standing up to the injustices of our time. And it is good to invoke him, but only if we are true to who he was and don’t just use him as an icon, overlaying ideas and actions onto him that he did not share or would not condone. We can only invoke his name if we are also dedicated to inclusion, nonviolence, respect, and creating equality for everyone.

In his New York Times op-ed piece, which he wrote to be published upon his death, he writes:

“In my life I have done all I can to demonstrate that the way of peace, the way of love and nonviolence is the more excellent way. Now it is your turn to let freedom ring. When historians pick up their pens to write the story of the 21st century, let them say that it was your generation who laid down the heavy burdens of hate at last and that peace finally triumphed over violence, aggression, and war. So I say to you, walk with the wind brothers and sisters, and let the spirit of peace and the power of everlasting love be your guide.”

The highly courageous and deeply spiritual hero of our time, John Lewis, left us with more than words. He showed us that in the end justice is really just us, all of us, and if we are to achieve the dream of freedom and equality for everyone, we must meet his call and follow the good trouble path of peace.