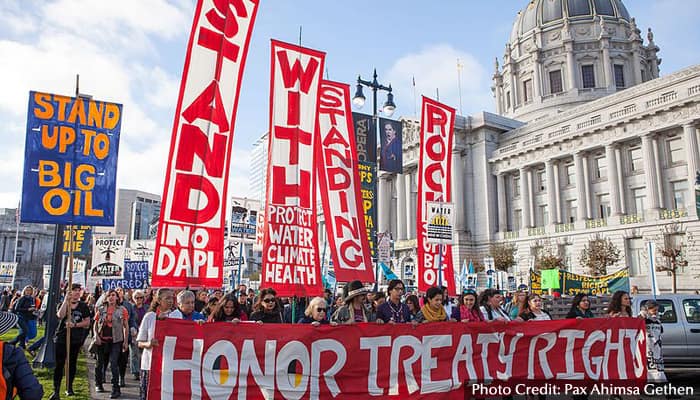 The brutality that has occurred at Standing Rock for so many months now reminds us of a history steeped in broken promises, outright lies, theft, and genocide. This is not new, yet it persists in new ways. When indigenous peoples lost their lands over and over again to the insatiable European appetite, a precedent was set; one that held nothing and no one sacred. Now history is repeating itself in North Dakota where the Sioux Nation is making another brave stand in the face of overwhelming force. But this time it is not just the Sioux who have gathered to protest and defend what is sacred.

Thousands of people from across the country have gathered to protest the pipeline and the risk it poses to the environment. Veterans, environmentalists, and activists of all stripes have joined in making this stand. As a result, the Army has agreed to reroute the pipeline and consider the environmental impact as part of restructuring their plan for building it. However, this does not mean the battle is over.

What strikes us most about this remarkable event is how the indigenous people are once again standing up to those forces that would not only steal their land, but also, more significantly, would defile and destroy it. The action at Standing Rock is nothing less than a national, perhaps global, stand on behalf of the earth.

So, what can be learned from the people of Standing Rock and the indigenous cultures that have lived in harmony with nature for thousands of years? That water is precious. That life is precious. That our relationship to the earth is precious. And these are times where life-affirming actions are needed.

As we allow ourselves to notice all the ways we are supported by the earth, we reaffirm our relationship to her. We can look within ourselves and see where and how we support justice for all people. We can take actions that promote the general welfare of the earth and all her creatures. If we do make efforts in these directions, we will join our voice with the voices of the people of Standing Rock and affirm our commitment to values and actions that support us all. The people of Standing Rock are all of us and they remind us to remember our connection and come home to the earth. We must heed their call.