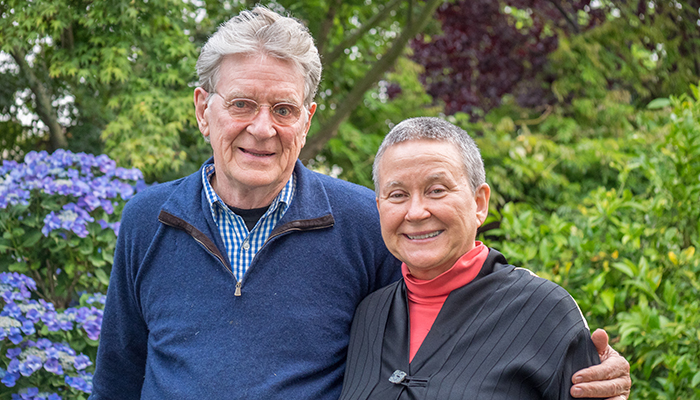 Robert Thurman and I spent several years teaching a class called Embracing the Sacred Feminine. The class was an exploration of the power of the feminine within Buddhist philosophy. At the beginning, I was surprised that Bob wanted to teach this class together because it was outside of his usual focus in teaching. But it was right in the heart of mine. I had been teaching two classes, the Initiations of the Sacred Feminine and Tracking Spirit in the Birth Environment: The Creative Portal for many years. I was excited to teach what I knew from this perspective and learn more about the power of the feminine within Buddhist philosophy when I accepted his invitation.

At the outset, I realized this was a learning for Bob as well. Although he had an incomparable mastery of Buddhist philosophy, he had never really filtered that mastery through the lens of the Sacred Feminine in the way class required. At first, it was hard to perceive the influence of the feminine beyond the expressions of the female deities, but that quickly shifted for the two of us.

I remember Bob coming down to breakfast one morning when we were teaching together at Menla, Tibet House’s beautiful retreat center in the Catskill Mountains of New York. I was in a reverie with the great white pine that grows outside the large paned windows of the dining room when Bob dropped his breakfast tray in front of me, blocking the pine, and shouted “Prajnaparamita!” Prajnaparamita is most often translated as the ‘Perfection of Transcendent Wisdom.’ Prajnaparamita can refer to a set of teachings on the subject, and I was trying to figure out which one he might be referring to. But he was expounding on his theory about the true meaning of the word. He had decided that it really meant ‘Womb’ but that translators with an anti-female bent had erased this concept held in the many layers of meaning within the Sanskrit word. “All the teachings emerge out of the womb of Prajnaparamita…”

That was the first glimpse I had of what came to be a very clear picture over the time we taught together: that the guys had come in and taken over the teachings of the Great Mother that are at the heart of Buddhist philosophy. “The Perfection of Wisdom is all-embracing. All knowing emerges out of the ever-yielding field of Prajnaparamita.” These were statements I had heard about the Prajnaparamita teachings, but I had never focused on the qualities of the Sacred Feminine – all-embracing, ever-yielding – at the heart of these expressions.

As he went more deeply into this concept in our teaching together, he unearthed other forms of the feminine within Buddhist philosophy that inspired him anew. The nine moon goddesses, Palden Llamo, and of course, Tara. One day in class, as he was telling stories about the way that Tara had inspired many famous male teachers, I saw the world of the feminine enlivening the actions of the masculine in new ways once more as I listened to his words:

“There are many great teachers who have had a special relationship to Tara and who have followed the instructions that she has provided them to help further the practice of the dharma. Atisha, a great master who was born in northern India around 980, is one of these teachers. He was born into a royal family, and as he was studying to become a prince, Tara began appearing to him in the form of a blue utpala flower. When these flowers appeared, he would speak about her – and to her.

Later, as he was about to step into his duties as a prince, Tara appeared before him in a vision. In this vision, she said, ‘If you become attached to your kingdom, you will be like an elephant when he sinks into mud and cannot lift himself out again because he is so huge and heavy. Do not become attached to this life. Study and practice Dharma. You have been a spiritual guide in many of your previous lives, and in this life also you will become a spiritual guide.’

He followed her advice, and set off on a path of spiritual development, abandoning his duties to the royal line. He had a tattoo of Tara drawn into his skin, and it is said that the tattoo would channel her instructions. He asked her questions, and she guided his steps.

She told him to go to Tibet in order to further the dharma even though it would shorten his life by seventeen years. He went to Tibet. When he was in India, though he was already a great master, she told him to go to Indonesia to recover the precept of the exchange of self and other, the Shantideva compassion teaching. He was born three centuries after Shantideva, and the practice had vanished in India. According to her instructions, he went to Indonesia and brought back the teaching, which became fundamental in the development of Tibetan Buddhism.”

When we taught together, Bob would usually give an academic lecture about an aspect of Buddhist practice that was influenced by one of the female deities. I would then do a series of experiential processes that included meditations on the subjects he presented and interactive practices that helped students see how the different aspects of the feminine were relevant to their own experience. As time went on, we both became more and more focused on Tara, however. In her twenty-one expressions, she seemed to encompass all the expressions of the feminine within Buddhist practice. He deftly distilled the complexity of these many expressions in his lectures:

There are also the ‘Secret’ Tara practices that have to do with Tara’s role as a Tantric deity that include practices with the clear light and the super subtle mind. In Tantra, the female forms of Buddha are very numerous. In the mother Tantras, the emphasis is on what is called clear light. The magic body is bliss and the clear light is wisdom. There are many forms of the dynamic female. The double vajra is the symbol of the family of deities to which Tara belongs. The word ‘Vajra’ can mean a thunderbolt or a diamond or clear light of the void. It’s the nature and substance of reality. The idea is that the sacred feminine is the nature and substance of reality.

In tantra, the qualities of each of the Tantric deities are understood to reside within the deepest reaches of the subtle mind. The proscribed tantric practices related to each deity evoke these qualities within the practitioner and bring them forward into awareness. Tara’s primary Tantric qualities center on action – especially action related to miracle working and deliverance from pain and danger. She is known as the ‘Goddess of Action,’ or the ‘Queen of the Action Family.’ As such, she is the consort of Amoghassiddhi, Lord of the Action Family.

As with other Tantric deities, she has many forms. The Twenty-One Verses in Praise of Tara refer to these many forms, which take on different colors. The black Taras manage the creative and destructive forces, the yellow Taras relate to prosperity and the white Taras relate to healing, for instance. There are specific rituals, mantras, gestures and prayers that relate to each of these forms that can be practiced in order to evoke the particular qualities each form contains.”

We taught the Embracing the Sacred Feminine class in many different venues. We taught at Menla, where a 20-foot high and 15-foot wide thangka of the Taras resides over the central hall of one of the main buildings. We taught together at the Sacred Stream Center in Berkeley, California, a deeply feminine space with vaulted chestnut ceilings and warm stained glass. We taught classes online together, where he would call in from New York and I would call in from California. And we taught at different conferences, including the Science and Nonduality Conference where his lecture on the way that Tara’s teachings allow for the resolution of duality was always well-received:

“Although Tara is best known in the west as a Tibetan Buddhist deity, she has long been revered in India. In Hinduism, she is known as one of the Mahavidyas, or Great Wisdom Goddesses. She shares many of the qualities of other Hindu goddesses, including Kali, the goddess of destruction and creation and Durga, a goddess who overcomes demons. Buddhism, which arose in India and is, in many ways, a response to the spiritual practices of India, continued to develop texts and practices related to this ancient goddess. Tara, in her many forms, is considered to be the mother of all Buddhas, the mother goddess of all things, the goddess of the heavens, the goddess of the earth, the goddess of the underworld, and the penultimate saviouress.

When people understand enlightenment more properly in a non-dual way, they will realize the female has an advantage among humans to attaining enlightenment, not the male. It’s harder for males who tend to isolate themselves. Tara represents the female who manifests enlightenment, and from enlightenment takes care of people in an embracing, non-dual way. Tara practices became more widespread in the middle of the first millennium and emerged even more strongly with the development of Mahayana Buddhism. We associate non-dualism with the rise of the feminine, and the masculine tends to be more dualistic. Men tend to dominate and fight. Non-dualism is more about fitting together.”

After one particularly long day of teaching, Bob flopped down next to me on the wicker couch overlooking the broad expanse of lawn outside the conference center. I handed him his favorite after-teaching treat, a bowl of chocolate ice cream. He sat, eating it pensively. And then he turned and said to me, “You know, I love the Buddha. And I love the Sacred Feminine. And the Buddha is the Sacred Feminine. Of course, it all goes beyond that – but it starts there. You see that, don’t you?”

I took in this profound statement offered in this almost casual way. I took a deep breath and looked out into the sky, where the sun was dissolving into hues of pink and yellow, which in turn were beginning to glow in the dark blue of evening. “Yes,” I said, “I see.”