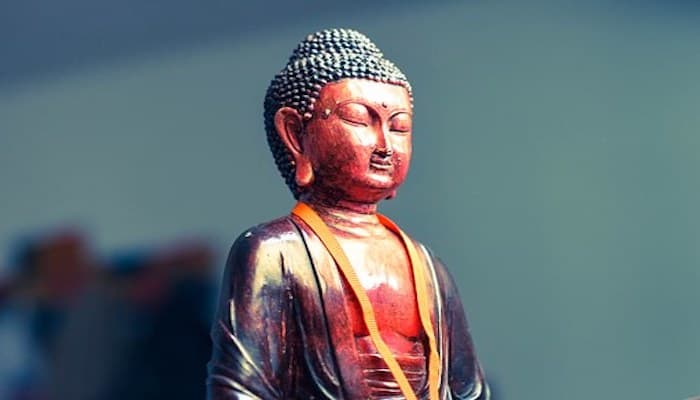 Blog: The Relationship between Tsongkhapa and Manjushri

Tsongkhapa, a Buddha in the Land of Snows is Buddhist scholar Thupten Jinpa’s contribution to Shambhala Publications’ series, The Lives of the Masters, which seeks to memorialize the contributions of some of the most important thinkers in Buddhist philosophy. Jinpa’s book decisively puts Tsongkhapa on the map, not only as an outstanding philosopher of Buddhism, but as one of the great logicians of the last thousand years. This scholarly biography reveals Tsongkhapa’s life and teachings in a refreshingly accessible way. Tsongkhapa lived from 1357-1419 and is considered one of the greatest Buddhist philosophers and teachers that ever lived. He is known for his many accomplishments, not the least of which is his role in the Ganden Renaissance. The Ganden Renaissance brought new scholarship, new interpretations of traditional teachings, and established new centers of study in Mahayana Buddhism. An interesting undercurrent of this renaissance was the relationship between Tsongkhapa and the Tibetan deity, Manjushri.

In Tibetan Buddhism, the deity Manjushri is associated with clear thinking, intellectual study, and the development of wisdom. In the pantheon of Buddhas, he is considered the embodiment of the wisdom of all the Buddhas. At around the age of thirty-five, Tsongkhapa went into retreat with Lama Umpapa, who became a direct channel for Manjushri and gave Tsongkhapa instructions that profoundly informed Tibetan Buddhism. The body of work that emerged from these channeling sessions was immense. The connection Lama Umpapa provided established the relationship between the transcendent insight of Manjushri and the empirical analysis of Tsongkhapa.

In his book, Jinpa describes how this collaboration provided new perspectives on classic texts, including Nagarjuna’s and Atisha’s teachings. Nagarjuna is the founder of the Madhyamaka school of Mahāyāna Buddhism and is considered an important Buddhist philosopher. Atisha’s writings were instrumental to the spread of Mahayana and Vajrayana Buddhism throughout Asia. Tsongkhapa would bring the finer points of their texts to Manjushri through Lama Umpapa, and request elucidation and teachings on them. Manjushri’s answers were then recorded and applied to the traditional interpretations through Tsongkhapa’s clear analysis.

The relationship between Manjushri and Tsongkhapa is well-known in Buddhist philosophy. What becomes clear through the book is that Tsongkhapa’s relationship with Manjushri was not the only source of wisdom feeding this new analysis in Buddhist thought. Jinpa describes meditation retreats of small groups of monks where Manjushri answered questions through the channeling of other monks as well. Indeed, Tsongkhapa himself learned how to become a medium for Manjushri’s teachings and began working directly with Manjushri in this way later in life.

Channeling is a phenomenon that is not given much credibility in our empirically focused society. Yet channeling is found throughout history in the encounters of mystics with the divine, and even today with popular channels like Paul Selig, Jane Roberts, and Louise Hay. However, it is not limited to mystics or self-defined channels. Many great thinkers, including Albert Einstein, have attributed their insights to transcendent inspiration. Tibetan Buddhist thought is highly logical, but it is not averse to the esoteric experience of wisdom. In fact, it embraces both logic and mysticism and has evolved methods of investigating the world beyond everyday awareness through practices like meditation and dream yoga. Tsongkhapa, a Buddha in the Land of Snows has much to offer those interested in understanding Tibetan Buddhism. It is not a book on channeling, but I focused on this subject because it struck me how accepted this way of working is in Tibetan Buddhism. It is embraced rather than shunned, and this too has something to teach us about wisdom, logic, and our own relationship to the divine.