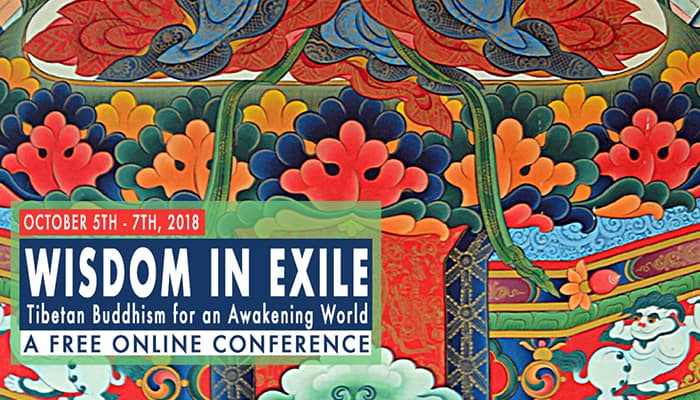 We’ve been working all spring and summer with Embodied Philosophy and Tibet House US to bring speakers together for the free online conference, Wisdom in Exile, which will be held October 5-7, 2018. The focus of the conference will be preserving the wisdom of Tibetan Buddhism, which has been practiced in exile for over half a century.

Jacob Kyle, the Director of Embodied Philosophy, has said:

“Tibetan Buddhism is unique among the many schools of Buddhist thought. For centuries, Tibetan Buddhists held esteemed residencies in the great Indian Buddhist Monastic Universities and translated the cream of those Buddhist “Libraries of Alexandria” into a unique collection as well as continuing the oral practice traditions from the great Siddhas during the full flowering of Indic Buddhism from 600 to 1100 CE.

The canon of work that emerged from these pursuits addresses some of the most important mysteries that we as humans have always faced– and offers a repository of knowledge that can help us confront the challenges of the modern existential dilemma we are confronting today.
His Holiness, the 14th Dalai Lama has been instrumental in creating structures where this wisdom has, in large measure, been preserved in spite of the challenges of the Chinese occupation of Tibet that began in 1950 and continues to the present.”

But how do we continue to preserve this wisdom, and how do we meet the challenge of keeping these teachings in the forefront of spiritual inquiry for philosophers, thinkers, teachers and spiritual seekers so this knowledge is not lost? This conference seeks to delve into these questions through a series of interviews and lectures with such luminaries as Thupten Jinpa, Robert Thurman, Lama Tsultrim Allione, Tenzin Wangyal Rinpoche, and more.

There are marvelous moments in these interviews. Laura Chandler, host of the Sacred Stream Radio Podcast, interviewed several of the speakers. One of the liveliest interchanges occurred when she and Lama Tsultrim spoke at length about the role of women in Tibetan Buddhist traditions. Lama Tsultrim shares a conversation she had with one of her male teachers about the importance and inclusion of the feminine viewpoint in the practice of Tibetan Buddhism. He asserted that she was being dualistic by highlighting the role of women. Her response was, “And 2000 years of patriarchy is not dualistic?”

The Foundation of the Sacred Stream has been active in helping preserve Tibetan Buddhism and Tibetan culture for many years. We regularly collaborate with Tenzin Wangyal Rinpoche to raise funds for the Tibetan Association of Northern California (TANC), and the money we raise is earmarked for the education and cultural programs for youth that TANC sponsors. We work closely with Geshe Pema Dorjee, who was the Director of the Dharamsala Children’s Village for many years, to raise funds for at-risk youth in Tibet and Nepal. In 2013, Geshe Thupten Jinpa, His Holiness the Dalai Lama’s principal English language interpreter, asked Sacred Stream to sponsor a year-long U.S. cultural exchange for the monks of the Gaden Shartse Dokhang. We helped them raise awareness about Tibetan Buddhist traditions across the country and to rebuild their monastic halls and dormitories. Through our collaborative workshops with Tibet House US and Menla Mountain Retreat, we provide education about Tibetan Buddhist philosophy to a wide range of modern seekers. The Wisdom in Exile conference is part of the natural evolution of Sacred Stream’s effort to help support the wisdom of Tibetan Buddhism and the people who are part of the tradition.

If you want to register for the conference, you can visit embodiedphilosophy.org/p/exile. If you are not able to join live, you can purchase the program using the same link.