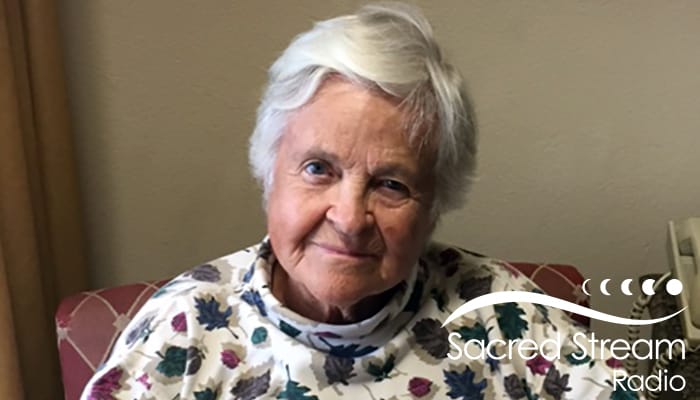 Description: In this episode, Laura Chandler concludes her extensive interview with Margarita Melville–activist, educator, and member of the Catonsville Nine. Laura met with Margarita in her hotel room in Chula Vista, CA, where they discussed Margarita’s dedication to the Guatemalan people, her time in prison as a result of the Catonsville Nine action, her marriage to former Maryknoll priest Thomas Melville, and how marriage was part of their revolutionary plans.

This year marks the 50th anniversary of the Catonsville Nine, when nine Catholic activists burned draft files using homemade napalm to protest the Vietnam War on May 17, 1968. They were tried and convicted in federal court and sentenced to a total of 18 years in prison. At age 88, Margarita still exhibits the passion and energy that has been the signature of her life. She tells the story of the murders of student activists that she worked with and her own narrow escape from Guatemala after being betrayed to authorities for her participation in the resistance. Margarita also discusses politics today and how her view of spirituality and Christianity has grown over the years. And she has a special message for the young activists today.

Melville was born in Mexico of American parents in 1930 and entered the Maryknoll order in 1949. In 1954, she was assigned to Guatemala where she taught students from elementary to university levels. She worked with university students on labor and literacy issues and was expelled in 1967 for involvement in the “internal politics” of the country. She left the Maryknolls and married former priest Thomas Melville in Mexico in 1968. The Melvilles returned to the United States in 1968 to work to change U.S. Latin American policy. She became involved with the Catonsville Nine as a way to bring attention to the plight of the people of Guatemala and sought to draw parallels between U.S. actions in Latin America and Southeast Asia. After serving prison time for her part in the raid, she earned a Ph.D. and became Head of Ethnic Studies at University of California, Berkeley. She is the author of several books and articles, and retired from Berkeley as Associate Dean in 1995.

To find out more about the Catonsville Nine and the 50th anniversary commemoration with Margarita and Amy Goodman of Democracy Now, visit catonsville9.org.

This episode features music from Lisa Kellman’s outstanding album, Nostalgias. Lisa is a San Francisco vocalist, activist, and herbalist. You can learn more about her and her music on our website, sacredstream.org.