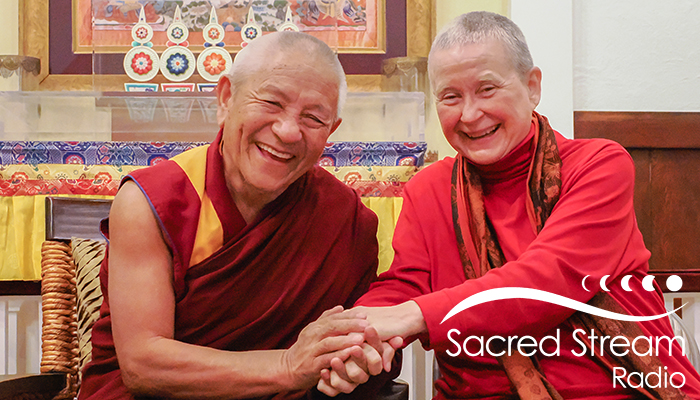 On this episode, Isa Gucciardi, Ph.D. is our guest host, and she continues the conversation from our last episode with Geshe Pema Dorjee, picking up where Laura and Geshe-la left off. They discuss his life in India after escaping from Tibet. He recounts his adaptation to a new way of life – the difficulties as well as the joys. He describes his early encounter with the street children of Nepal who helped him when he needed it most and who inspire his humanitarian efforts to this day. His fascinating story includes his time as the head of the Children’s Village in Dharamsala and his work to preserve the Bodong tradition of Tibet. He also discusses the many projects he has ongoing to help the poor and disenfranchised people of Nepal and northwestern India. His humor, sincerity, and kind spirit shine through in this at-times playful and engaging conversation with his longtime friend, Isa.

Geshe Pema Dorjee has advanced degrees in Buddhist Philosophy and has played several important roles in helping establish and maintain the Tibetan community in exile, including his position as the Principal of the Tibetan Teachers Training Center. He was also the head of the Children’s Village in Dharamsala, which is a school for displaced Tibetan children where he oversaw the care and education of over 16 thousand children.

At the request of HH Dalai Lama, he now runs a monastery in India and is in charge of translating thousands of texts to help preserve the ancient Bodong tradition of Tibet. Additionally, he continues his tireless work in Nepal and northeast India of establishing schools, arranging medical care for the sick and injured, providing care for the elderly, creating orphanages, combating human trafficking, creating a safe house for street girls, introducing new agricultural techniques, and providing safe water, toilets, and smokeless cook-stoves to remote villages.

To learn more about Geshe Pema Dorjee and his projects, visit buddhistcharity.org.