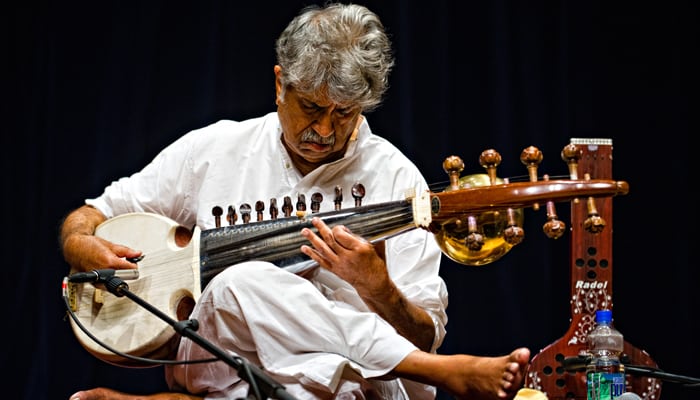 Taranath is a master of the sarod, a four-stringed lute central to classical northern Indian music. He has drawn accolades from critics and audiences throughout the world. Accompanied by percussionist Vikas Yendluri on the tabla, he will perform ragas: intricate, colorfully improvised melodies and rhythms.

A distinguished disciple of the legendary Ustad Ali Akbar Khan, Rajeev Taranath was the recipient of the Indian government’s highest award in the arts in 1999— for outstanding achievement in the classical music field. In performances throughout the world, he has been acclaimed for his technical virtuosity, inspired imagination, and emotional range.

Taranath’s credentials as a researcher and educator are as impressive as his track record as an artist. A noted linguist, he speaks eight languages fluently and holds a Ph.D. in English literature from the University of Mysore. As a Ford Foundation Scholar, he researched one of the most important lineages of classical Indian music, the Maihar-Allauddin gharana or musical lineage. Additionally, from 1995 to 2005, Taranath served on the music faculty of the California Institute of the Arts in Los Angeles.

Recommended to purchase tickets early, seating is limited for this special engagement.