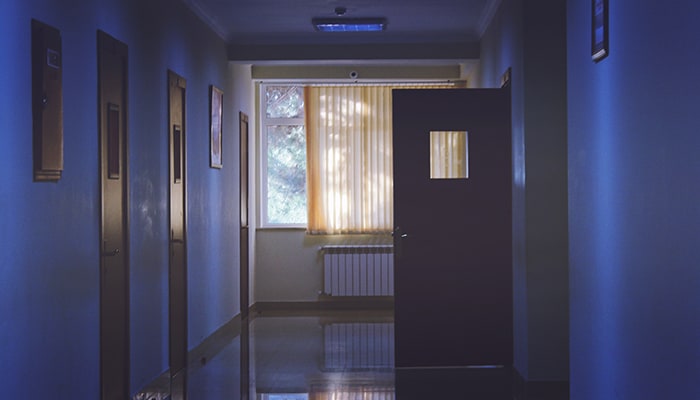 Article: The Shamanic Practices of Space Clearing: Part One

It was a foggy summer day in 2003, and as I was trying to ascertain if the fog had any intention of clearing, the phone rang. I answered it and the voice at the other end spoke in a hushed tone, “Look, you are going to think I am crazy, but I think we have ghosts. Someone said you might know what to do about that.”

The woman calling was one of the administrative managers at a non-profit foundation that had taken up residence in the Presidio, a former military installation that had been turned over to the National Park Service several years before. When I assured her that I didn’t think she was crazy and that there might be something I could do to help, she opened up.

She said, “Well, we have a whole section of our offices that people are just refusing to work in. Some say they feel chills when they go there, others say they see shadows in the ladies’ room mirrors, and we often hear the doors open and close when no one is near them. The electrical system has shorted out for no apparent reason at least four times in the last three months. We really don’t know what to do. We are paying rent for that part of the building, and we need to be able to use it.”

As it turns out, they were housed in a building that had been a military hospital from 1898 until it closed in 1994. Many wounded soldiers spent time recovering in that building. There was also a psychiatric ward, and many people who had experienced a great deal of trauma passed through the building for nearly one hundred years.

Though it is not usually discussed, trauma can leave an energetic imprint, and it is somewhat common for older buildings like this one to carry these imprints. The stronger the imprint, the more likely it is that there will be some manifestation of disturbance or disruption. When disturbances are perceived at the level described by the manager of this former military hospital, a space clearing can help.

Space clearing is a time-honored practice that is found in most shamanic traditions. In our culture, we don’t have a vocabulary for talking about things like “energetic imprints” or “energetic patterns,” yet we are in relationship to these things all the time without knowing how to talk about it.

For instance, if we walk into a room and get a creepy feeling, we may not know why we have the feeling, but we know we cannot stay there. Or we might walk into a room and experience a positive feeling that makes us want to stay. Another example is thinking of someone and then getting a phone call from them. These things happen all the time, and they are examples of us perceiving something beyond our five senses.

Central to the idea of space clearing is the possibility that not only the spirits of the dead, but also imprints of the activities of the living, can affect the health and vitality of a place. People who enter a church or temple will often feel a sense of calm or tranquility. This is due to the imprint of the positive intention of all the prayers that have been expressed there. We notice these kinds of experiences, but are often unaware of why or how we perceive them.

Perceiving these imprints can be referred to as the “sixth sense,” but I think it is better described as intuition. We all have intuitive abilities. It’s not magic. It’s listening to the gut. In our culture, we often ignore our intuition, but it is possible to develop our facility to work with it in a productive way.

In other cultures, there can be a greater acceptance of perceptions emerging through the intuitive sense. Traditionally in Japan, no one would ever buy a second-hand piece of clothing— not even a fine kimono for a good price. This is because of the previous owner’s imprint on the clothing, which was considered to be interrupting to the energy of the new owner.

In many Plains Indian traditions of North America, the belongings of a deceased person would be burned in a fire along with the herb, sage. Sage is a plant known to clear energetic patterns in every culture where it is grown. The reason the belongings were burned with sage was to help the deceased continue their dying process without being distracted by the energetic imprints left on the material items that were dear to them.

As children many of us have this kind of sensitivity, but because the adults around us don’t reinforce our experience— or even challenge or denigrate it— we learn to stop listening to it. People who are drawn to shamanic training are often unable to shut down their sensitivity, and so they look for education to help them learn to live with this heightened perception more easily and direct it in an organized way.

The people who offer space clearing services through the Space Clearing Society have all gone through this kind of training. They have learned how to recognize energetic imprints of past experience and to mitigate the effect of those imprints.

When I received the call from the manager of the non-profit, I knew that with so many reports of anomalous activities in the building, I would not be able to address the issues effectively by myself, so I called upon a group of shamanic practitioners who trained with me and have learned how to recognize energetic imprints of past experiences and to clear the effect of those imprints.

About fifteen of us gathered to clear the space. We performed a ceremony, burned sage and other herbs, and worked with our inner guidance to understand what healing might be needed for the spirits who had died in the space. We also asked for instruction on how to resolve imprints of imbalance left there by men struggling to regain their sanity after the trauma of war. We worked for about two hours. It was a complex clearing, and I knew it would probably take more than one visit to clear the space.

A few weeks after the clearing, I checked in with the manager. She had convinced a few coworkers to take up office space where they had refused to go before and they reported that something had shifted. The electrical grid had not failed since the clearing, and overall the anomalous experiences had subsided.

Other groups renting space in the Presidio heard about our clearing, and I received call after call for the same kind of help. I realized I needed to establish a formal group that offered focused training to prepare members to offer these services to the wider community, and so, the Space Clearing Society was born.

Since that time, the Space Clearing Society has grown to over one hundred members in two chapters— one on the East Coast, and one on the West Coast. We have performed hundreds of clearings over the years. Each chapter performs at least one clearing a month on a donation basis, and the donations go to the Scholarship Fund of the Sacred Stream to provide training to more shamanic practitioners.

Our mission is to clear the spaces where healers (broadly defined as people who are helping other people or living beings) live and work. However, we also clear other businesses and organizations. We have cleared private homes and offices, animal shelters, schools, hospitals, and even a city hall.

It is always an honor to clear a space. It must be done with consciousness and great respect. The outcomes are almost always positive for the people seeking assistance. Because people are more tuned into subtle experience than they might ordinarily acknowledge, they are usually relieved to find others who understand their experience and offer them solutions.