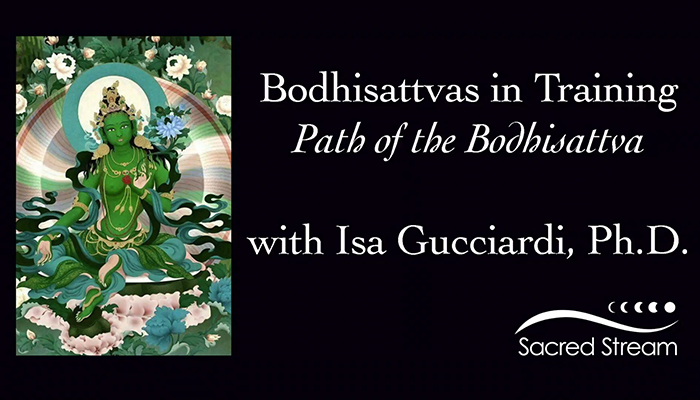 Video: Bodhisattvas in Training: Path of the Bodhisattva with Isa Gucciardi, Ph.D.

In this series of videos, Isa Gucciardi explores the concept of the bodhisattva, the Mahayana Buddhist belief that refers to anyone who has generated bodhicitta, a spontaneous wish and compassionate mind to attain Buddhahood for the benefit of all sentient beings.

About Isa Gucciardi
In the mid-nineties, Isa Gucciardi began developing Depth Hypnosis as she entered into clinical practice. Her studies, both in academia and in the field of cultural and linguistic anthropology, comparative religion, and transpersonal psychology formed the basis of her approach with clients and students. As the body of work that grew out of her clinical practice became larger, she began teaching others so that more people could benefit from the techniques she had developed. In order to accommodate the number of classes that grew out of this process, she co-founded the Foundation of the Sacred Stream, which is now a school for consciousness studies in Berkeley, California, serving hundreds of students each year. Isa teaches and speaks nationally and internationally, and she has published numerous articles, podcast episodes, videos, and the books The New Return to the Great Mother and Coming to Peace. She maintains a private practice with institutions and individuals in Depth Hypnosis and Coming to Peace processes. Isa speaks five languages and has lived in eleven countries. She is the mother of two children and lives with her partner in San Francisco.