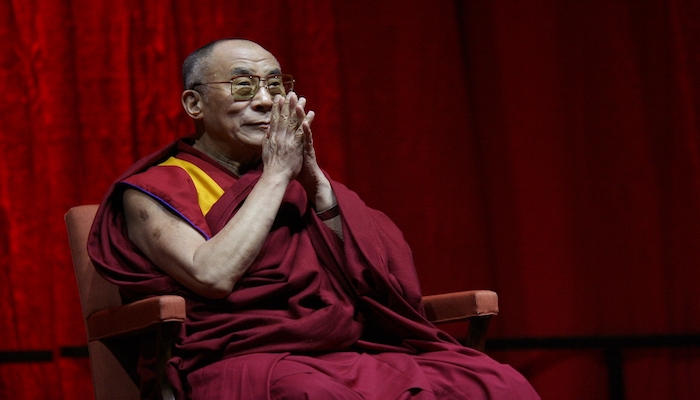 “We all share an identical need for love, and on the basis of this commonality, it is possible to feel that anybody we meet, in whatever circumstances, is a brother or sister. No matter how new the face or how different the dress or behavior, there is no significant division between us and other people. It is foolish to dwell on external differences because our basic natures are the same.”

His Holiness, the Fourteenth Dalai Lama, is a role model of compassion and courage for millions of people around the world. He has, almost single-handedly, stared down the Chinese government as it has dismantled Tibet and turned it into a Chinese fiefdom. He has done this without ever uttering an unkind word as he has watched thousands of his countrymen and women die at their hands.

His Holiness, the Fourteenth Dalai Lama was born in 1935 in Amdo, Tibet. His birth name was Lhamo Thondup. When he was two, he was recognized through a series of signs as the fourteenth incarnation of the Dalai Lama. He was sent to a monastery where he studied Buddhist philosophy.

In 1958 and 1959, as he was taking his final examinations, the Chinese, who had been in Tibet for several years, overran the country. His Holiness barely escaped. Thousands of other Tibetans were not so lucky. The Chinese killed and tortured thousands of Tibetans and destroyed many of the monasteries that had housed the ancient wisdom of Tibet and Buddhism for centuries. The losses of the Tibetan people were overwhelming.

His Holiness reached out to many foreign governments for help, but India was the only one that offered any substantive assistance. He has lived in exile in India since his escape, and has supervised the reestablishment of the monasteries, educational system, and social structures to help support the many Tibetans who now live in exile. He has travelled tirelessly, teaching Buddhism throughout the world and advocating for the Tibetan cause. He has done everything in his power to nurture and care for his people.

The Chinese government has destroyed the Dalai Lama’s country and tortured, imprisoned, or killed thousands of his countrymen. They have financed defamation campaigns against him, and he has to travel with a security force to protect him from their attempts to harm him. Yet His Holiness has never condemned the Chinese. Instead, he has always sought to establish mutual respect and an open dialogue with the Chinese government.

The Dalai Lama’s unwavering efforts to confront overwhelming domination and cruelty have been an inspiration to many. In recognition of his work, he has been awarded the Nobel Peace Prize, the Ramon Magsaysay Award, and multiple honorary academic doctorates and citizenships.

Although the Chinese government now occupies his homeland and the homeland of his people, his Holiness has helped them preserve their hearts and minds. He has done this by encouraging them, and all people, to maintain an attitude of compassion even toward those who harm them. By helping people cultivate compassion, he helps them create a sanctuary of goodness that no tyrant can overrun.

Thupten Jinpa, His Holiness’ interpreter, once told me about a meeting His Holiness had with an old monk who had spent 14 years in hard labor in a Chinese prison, simply for being a Tibetan Buddhist monk. He was a friend of His Holiness and he was overjoyed to see him for the first time since the occupation had separated them. He asked his friend, “What was the hardest moment for you?” The old monk replied, “There was a moment where I almost lost compassion for my captors. That was the most difficult moment.” His Holiness held his hand, patting it, nodding his head. They sat together in silence for a long time.

His Holiness has managed to keep this value system, so precious and hard-won, on the world stage in the face of overwhelming odds. By following his example, we can all learn the lessons of compassion he so thoroughly embodies. And like this monk, we too can learn how to cultivate and maintain an unassailable sanctuary of goodness within us.