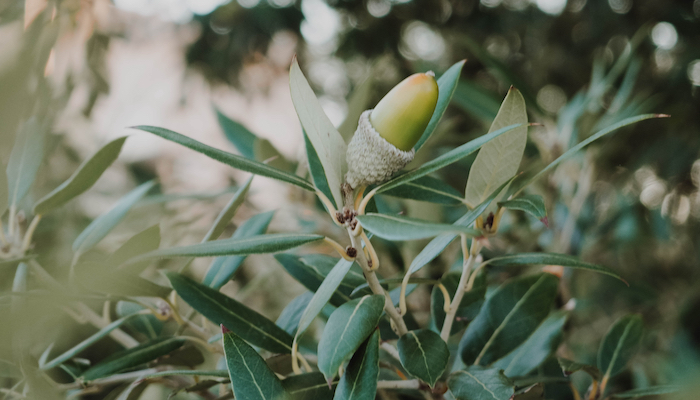 Blog: Reflections on the Fall Equinox

Around the fall equinox of 2018, as I was doing the fall garden clean up, I realized that a small California Live Oak had planted itself in the center of the garden at the Sacred Stream Center. I was very excited to have the oak choose our garden, but everyone else was worried that the oak would get too big and block out the other plants. I knew there was no way I would interfere with the oak’s plans, as we are visitors to its habitat – not the other way around.

Only 200 years ago, the land on which the Sacred Stream Center sits was covered in California Live Oak. The hills throughout California were dotted with these majestic trees, which can indeed grow very tall and spread their canopies widely. An oak taking up residence in that patch of ground would have had the flowing water of Strawberry Creek nearby and lots of laurel and bay trees keeping it company.

This week, as I was tending the fall garden, I heard a huge ruckus coming from the center of the garden. Three fluffy red squirrels were performing acrobatics in the oak, which has now cleared the roof of the center. Upon investigation, I realized that the squirrels were after the hundreds of acorns that now adorn the tree’s branches. I was immediately glad I had stood my ground, and not removed the oak in spite of the pleas to do so three years ago. I was so happy that this ritual, thousands of years old, was taking place in the garden.

At least twelve distinct cultures of Native Americans are known to have consumed the acorns as a dietary staple. The seeds were ground into meal, which, after being washed, was boiled into mush or baked in ashes to make bread.

As the fall equinox comes around again on September 22, this connection to that which endures seems more important than ever. So many people are dealing with illness, loss, and constant change. In many places, the earth herself is also in a state of flux outside the usual rhythm of the seasons. This is a time to remember that the season of the equinox is a season in which sameness finds a home. The day is exactly as long as the night at this moment. Although many people may be weary of the ways in which the last 18 months have not allowed for a lot of variety of experience, there is something to be found in constancy.

One constant which has sustained me over the course of these challenging times is my daily spiritual practice. This practice includes a daily ‘sit down’ outside with the earth and the sky. It is a simple practice everyone can do. I have seen that people who start a daily practice gain resiliency. A ritual of sameness seems to sustain them through all the changes that emerge out of almost every aspect of experience.

In a world of grief and pain,
flowers bloom –
even then
Kobayashi Issa, The Spring of My Life and Selected Haiku