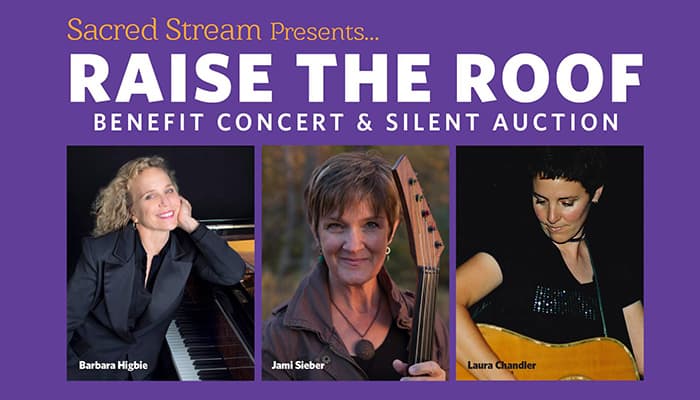 The Sacred Stream’s Raise the Roof Benefit Concert and Silent Auction is happening on October 18 and aims to raise funds for repairs at the Sacred Stream Center. The evening will feature Grammy-nominated, Bammy-award-winning composer, pianist, fiddler, singer-songwriter, and multi-instrumentalist Barbara Higbie, internationally renowned electric cellist Jami Sieber, award-winning singer-songwriter Laura Chandler, and other special guests. There will also be a reception before the concert and silent auction featuring some stellar items.

The Sacred Stream Center opened its doors in Berkeley, California in 2009 and is home to all of the Sacred Stream’s workshops and events. It also hosts other teachers and programs, and has become a community landmark. This event will raise funds for a new roof for this 100-year-old building. The estimated cost to replace the roof is $30,000 and will need to be completed within four years. However, immediate repairs are needed now and will cost approximately $6,000.

The concert will include an awesome line-up of musicians lending their talent to this worthy cause. Here’s a little more about them:

Barbara Higbie is a Grammy-nominated, Bammy-award-winning composer, pianist, fiddler, singer-songwriter, and multi-instrumentalist. She has performed on more than 100 albums, including Carlos Santana’s 2007 release. A master of collaboration, she has performed with many outstanding artists including Bonnie Raitt, Kronos Quartet, Spyro Gyro, and Bobby McFerrin. Barbara’s music spans many genres, including traditional jazz, bluegrass, new classical, blues, and African pop. As a solo artist, Barbara’s album Signs of Life was named a Washington Post “Top Ten of the Year” and she was the first ever artist-in-residence at the prestigious West Coast Jazz Club, Yoshi’s. Higbie got her start on Windham Hill Records and was the first female instrumentalist to compose and record for the groundbreaking label. Her original composition, “To Be”, was an instant hit on radio and VH1 for her popular band, Montreux. She has also appeared on Olivia Records with Teresa Trull and her own Slow Baby Records.

Jami Sieber is an internationally renowned electric cellist, singer, and composer. She creates lush soundscapes using her voice and the cello through a process called “looping” that turns her solo instrument into an orchestra of heart-opening sound. Her unique musical vision is inspired by her lifelong commitment to the environment, social justice, and the healing arts. Jami won the coveted Northwest Area Music Association (NAMA) award for “Best Rock Instrumentalist” and has toured with major recording artists, including Ferron and Rhiannon, as well as her band, Rumors of the Big Wave. She has composed for dance, theater, film, and her compositions have been used in the popular video game, Braid. This sometimes ethereal, sometimes hard-edged, musician has earned rave reviews throughout Europe, Asia, and North America, having been an invited guest artist in China, Russia, the Balkans, Italy, France, and Thailand.

Laura Chandler is an award-winning singer-songwriter that blends elements of jazz, pop, and folk music to create a unique sonic landscape. With an emphasis on intelligent lyrics, her music is made of “crisp shimmering pop and a honey dipped voice coats every word.” (Performing Songwriter Magazine). Chandler has contributed music to film and television and her songs have been included on several compilations. Her soundtrack for Conde Naste’s Lucky Magazine commercial, “Cheryl and Me,” won numerous awards and earned an appearance on ABC’s, “The World’s Greatest Commercials.” Laura has toured with — or been the supporting act for — many outstanding artists, including The Violent Femmes, Meshell Ndegeocello, Chris Isaak, Larry Carlton, Keb Mo’, Acoustic Alchemy, and Iris Dement. She was named “Best of the Bay Area” by Fast Folk Music Magazine, and was also honored by Nashville’s renowned Blue Bird Cafe in a tribute to up-and-coming songwriters.